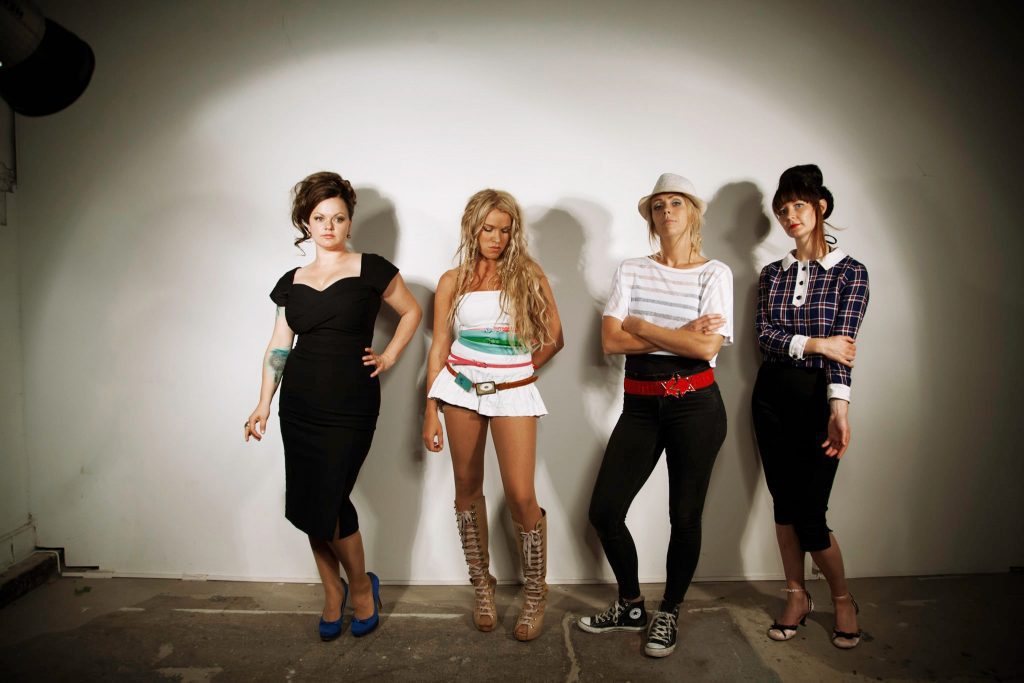 Weekend Intermission – debate – which was the best all-girl band?

Weekend Intermission is our regular feature where we look at an artist or band not from the Nordic countries, just to mix things up a bit. This one is a little different as you will discover.

OK, this isn’t really a debate, except one between me and me because in my opinion, for all the claims of the likes of The Bangles, The Runways, Four Girls, The Belle Stars, First Aid Kit, Haim, Hinds, Ibeyi, PINS, The Staves, Stealing Sheep, Warpaint, Let’s Eat Grandma and the latest contender for all of five minutes, Wet Leg, together with hundreds of others, there are really only two contenders.

First off, let’s set the parameters. This article is about bands whose members play instruments, not groups who just sing. That’s why there are no Spice Girls, Sister Sledge, Babymetal and so on even under consideration.

Ironically, the first candidates began their regrettably short-lived career unable to either sing or play their instruments at all.

The Go- Go’s (the apostrophe is theirs, not mine) ‘formed’ in Los Angeles in 1978 as a rag-tag bunch of sex-crazed, drug and booze-addled but ambitious punks who hung out together in a dive just off Hollywood Boulevard they called Disgraceland. Their ‘leaders’ were the runaway Belinda Carlisle and the daughter of a German surgeon originally from Milwaukee, Jane Wiedlin; both previously living in the San Fernando Valley (the home of the ‘Valley Girl’).

They set out to be rock stars without knowing how to play a note. They sold themselves purely on attitude. Their first review said “The Go-Go’s are to music what botulism is to tuna.” Subsequently they recruited guitarist Charlotte Caffey, who at least understood a little about playing an instrument, having been trained on classical piano, and then drummer Gina Schock, already a professional, who made them practice every night instead of once every two weeks if they could be bothered at all.

The defining line-up change came in 1980 when Kathy Valentine – who had a perfect name for their Hollywood bordello – replaced the original bassist, bringing along too some genuine ability at song writing. It speaks volumes about The Go-Go’s that Valentine joined the band as an accomplished guitarist, was told they really needed a bassist and during just one afternoon, assisted by a supply of illegal substances, taught herself to be one, along with the bass lines to all their songs, from a virtually inaudible tape.

By then they had gone through their rite of passage, supporting Madness for three months in Britain, being bottled and spat at every night by members of largely skinhead audiences who universally hated them.  But that trip also bought them their first stroke of luck. They made a single, released through UK label Stiff Records, called ‘We Got the Beat’; more of a pop than punk song and it was popular on the L.A dance scene.

They couldn’t get a record deal but then they had their second break when they were spotted by executives from a fledgling record company who were attracted by the girls’ energy, their drive to succeed and the huge new wave power pop hooks they were now writing into their songs. But the quid-pro-quo was that they had to become cute and bubbly – in reality not difficult for most of them – and which is what they did while they recorded the album ‘Beauty and the Beat’ on a shoestring.

The biggest break of all though emerged out of Wiedlin’s brief L.A. affair with Terry Hall of The Specials. They kept in touch for a short while after he returned to England and in one letter Hall sent Wiedlin some lyrics that were prompted by their relationship and which she turned into a song. That song was ‘Our Lips are sealed.’

It wasn’t long before The Go-Go’s were supporting The Police on an arena tour. Shortly after that ‘Beauty and the Beat’ became #1 album in the U.S., for six weeks, subsequently gaining a Grammy nomination. From out of nowhere they became the most recognised band in America; the very essence of girl power while the Spice Girls were still at infant school, and the country’s sweethearts to boot.

But their luck all too soon ran out as excesses of alcohol and drugs allied to infighting over earnings and bragging rights destroyed them. Their manager walked out on them and their second album’s (‘Vacation’) sales were poor. They needed a vacation but they carried on touring whilst only concerned with getting offstage as quickly as possible to get drunk, stoned and laid, in no particular order.

Wiedlin, who wanted to sing more than Carlisle allowed her to, was the first to quit and that brought the band down just half a decade after they’d started. She and Carlisle went on to have solo careers and the others played their part in other bands. There have been the ubiquitous reunions along the way, the latest in 2019, but with only one new album between 1984 and 2001.

In 2011 The Go-Go’s got their own star on the Hollywood Walk of Fame right outside what had been The Masque, the punk club which hosted their first ever gig. Then in October 2021 they were – finally – inducted into the Rock and Roll Hall of Fame.

On July 31, 2020, the Go-Go’s released their first new song in 19 years. They have confirmed plans for a six date UK tour with Billy Idol in June 2022 although the precise line-up is unclear. Over 40 years after they started they’re back playing arenas.

So why do I rate them so highly?

They made history as the first all-female band that wrote their own songs and played their own instruments (though not very well at first) to top the US Billboard album charts.  Moreover, that album went triple platinum and is one of the most successful debut albums ever.

But there’s much more to it than mere facts. Having started off as musically clueless punks they learned their trade the hard way then reinvented themselves with perfect pop songs. Just listen to the unusual but seamless chord progression here in ‘My lips are sealed’, written by Wiedlin, a young woman who only a few years earlier didn’t know which way round to hold a guitar.

And the awesomeness of ‘Head over heels’, (Caffey/Valentine) a blistering piece of tuneful rock. How many male bands wish they could be this tight?

The only other serious contender in my view is a totally different one, and a Nordic one to boot.

Katzenjammer arose out of totally different circumstances to The Go-Go’s, being a group of well-brought up if individualistic young ladies from comfortable backgrounds who attended a private music college in Oslo but who rebelled big style against the school’s failure to encourage originality, only wanting to teach them what had been done before as they saw it, and considering themselves to be outcasts there.

They formed in 2007 reputedly after Solveig (Sol) Heilo heard Anne Marit Bergheim performing the song ‘Wading in Deeper’ on the piano. The lyrics are by Mats Rybø, a friend, and concern the suicide of Bloomsbury Group author Virginia Woolf. Rybø also acted as the main lyricist on their debut album ‘Le Pop’ and contributed to their other two albums. When Katzenjammer broke up in 2016 after the departure of Marianne Sveen he subsequently joined up with Bergheim and others to form the band Tiergarten while both Heilo and Sveen have pursued solo careers.

The term Katzenjammer refers to the Katzenjammer Kids, the oldest comic strip continually in syndication and after which they named themselves but it is also a German word that literally means the lament of a cat, and is used in Norway to describe low-grade music and instrumentation.

The irony is profound because Katzenjammer contained in one band possibly the most comprehensively gifted multi-instrumentalists in Norway or anywhere else for that matter, renowned for swapping instruments throughout their performances a la Arcade Fire. Heilo alone, who started off as a drummer, is said to be able to play 17 instruments.

Their ‘style’ was unique and transcended any attempt to categorise it by genre, encompassing pop, rock, country, bluegrass, baroque and ‘dark’ cabaret. While most of their songs were upbeat, major key productions they were perfectly able to switch into deep melancholia when they had to. Their lyrics often surprised audiences, with overtly sexual references, troubling allusions (for example to drug taking) and political comment often thrown in. It’s difficult to take any Katzenjammer song at face value; you’re always seeking out a hidden meaning.

Contrast the suggestive opening lines of ‘Cocktails and ruby slippers’ –

“Volatile and shaky/Wish you were inside me/Rattling like the subway/Oh, and that is on a good day…”

– with the disturbing solemnity surrounding the nebulous character ‘Lady Marlene’ –

Ultimately, their desire was to do their own thing, to be like no-one else and it is to their eternal credit that they succeeded, unequivocally, employing a variety of obscure instruments, such as a contrabass balalaika and percussive instruments that included a metal dustbin and a teapot.

And yet at the same time, they fully merit the accolade they once received as being “The Female Beatles.”

Contrast these two videos. The power, precision and gut-busting energy that goes into ‘A Bar in Amsterdam’ (which seems to tell the Anne Frank story) – and they could keep that up for two hours night after night – and the subtle, sophisticated, gorgeous and poignant – though dystopian – ballad that is the mysterious ‘Lady Marlene.’ (Both performances from the same show).

Coincidentally, the coup de grace, what finished them, was the departure of one of the band members as in the case of The Go-Go’s. In this instance it was Marianne Sveen, who left so that she could write the album that was gnawing away inside her although 12 years of almost constant touring must have played a part as well. She finally completed it late last year while Sol Heilo has released an album and a couple of EPs since 2017, and is working on another; and Anne Marit Bergheim is involved in at least two bands. The outlier is Turid Jørgensen (now Honerud). I haven’t been able to track down what she is doing now.

Questions are often asked as to the possibility of them getting back together. The chances are slim but are marginally enhanced by three of the members having found alternative outlets for their own creativity over the last five years and the fact that they did part company as friends, unlike the Go-Go’s, who hated each others’ guts.

But to do so would probably require them to make another album, something they were not proficient at, seeing themselves as a live band primarily. They only made three but again that is only one less than the Go-Go’s did in over four decades.

If they did decide to give it a go, and if Mats Rybø was able again to offer his lyrical expertise, then they would have an entirely new audience to go for, and I don’t only mean kids. Most of the people I know who follow them today never saw them and only discovered them after they broke up.

And of course, if the Go-Go’s can do it, why not Katzenjammer?