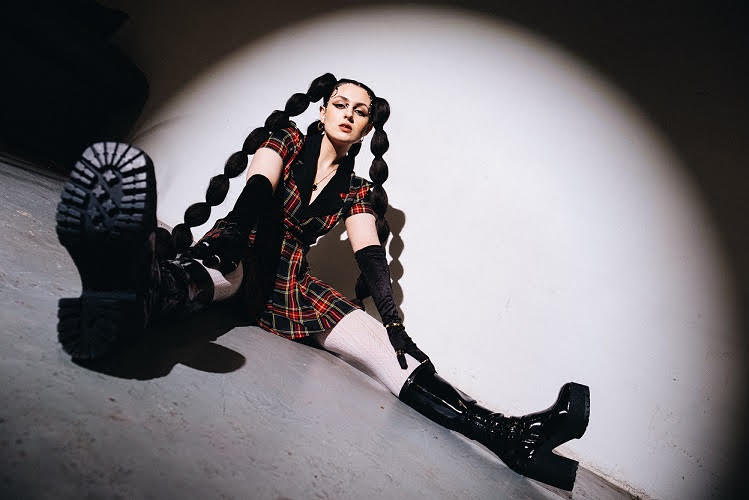 Weekend Intermission: Esmerelda (UK) – Too Much (single/track from forthcoming EP)

Over time I’ve mentioned how immigrants to the Nordic countries have often done quite well as musical artists, benefitting from a strong support network there, particularly in Sweden and Norway.

For this week’s Weekend Intermission we have for your delectation a young British lady with a partial Afghan background if I’ve interpreted it correctly.

The London-based Esmerelda is Charlotte Samady, who has previously recorded as LUNA, under which name she released her debut EP ‘Nostalgia’ in 2018. As Esmerelda she has released two singles already from what she refers to as a forthcoming ‘concept EP’, ‘Medusa Was Innocent’, which (and I’m quoting here) “uses the framework of Greek Mythology and the character Medusa to deconstruct the artist’s contemporary reality as a young woman.”

The two prior singles were ‘Jenny’ and ‘I’m not a Princess I’m a God.’ Some of these titles suggest she’s a deep thinker and she does classify herself as an “alternative pop artist, songwriter and creative director.” Now Alt-Pop comes in many guises. Sometimes it isn’t that alternative, sometimes it isn’t pop and sometimes it’s neither.

No such problems with Esmerelda. This is popular music at its best without sacrificing artistic integrity. It opens with Beatles ballad-like piano chords (think ‘Let it be’) before two successively stronger and memorable melody lines cut in, quickly defining the song. Even the short bridge carries a little tune of its own. Just the right length for radio, too. And she has a powerful voice, presented quite effortlessly.

Lyrically, she says, “‘Too Much’ is about panicking that life should be coming together quicker. It’s about comparing yourself to your friends, to your past self, to people on social media, and thinking….What am I doing wrong? Why do I feel like I’m not having as much fun or finding as much success as everyone else?”

The ending is abrupt and raises the game somewhat, painting a picture of someone who is so concerned about all this that she wishes she were dead.

Chill, love, you’re 23. When I was your age I’d already walked out of two universities and was eking out a living in a mail order warehouse. Look at me now. On second thoughts, perhaps don’t.

She adds that to compensate for these feelings she can be “loud and over-confident at times” and that consequently the song is an ode to all the times she’s felt like she should have “toned it down.” I note that she served as an intern at an organisation that brought her into contact with FKA Twigs, who always seems to carry around a frisson of angst about her; perhaps some of it rubbed off.

But over- confidence isn’t what I hear in this song, just understated self-belief, and it is fully justified. I’ll be surprised not to hear ‘Too Much’ coming across the airwaves in the near future.

‘Too Much’ was released on 28th January. ‘Medusa Was Innocent’ is due for release in 2022, specific date not yet advertised.