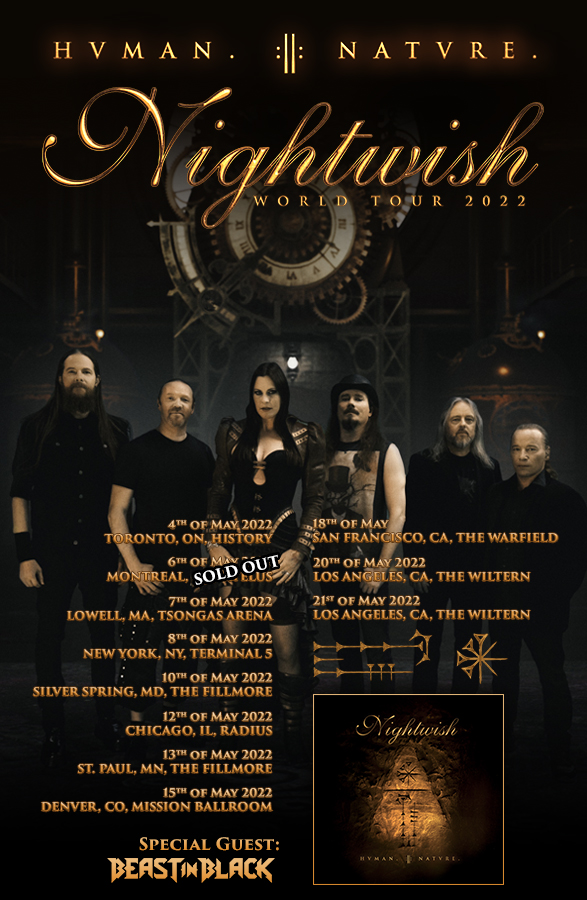 Hot on the heels of my personal selection, last week, of the best popular music song ever written (‘Bridge over troubled water’)  we return to the Nordics  for another song which I believe could be considered for the accolade; at the least for being the best song of the 21st Century to date.

On the surface it might seem a surprising one. For starters, its 10 minutes long and it features an instrumental bridge about a third of the way through that lasts for one minute 15 seconds, in which the main instrument is an oboe, and during which the band members leave the stage. But then the band, Nightwish, has several such lengthy opuses to its credit, including ‘The Poet and the Pendulum’ (14 minutes) and ‘The Greatest Show on Earth’ (16 minutes plus an extended spoken outro).

I did seriously consider the latter, a protracted story about evolution and a celebration of life that is oh so apt just now, for this section but it would have to have been in addition to ‘Ghost Love Score.’

Then there is the fact that Nightwish is fundamentally a metal band and not only that, a symphonic metal band and metal is never considered for accolades like this outside of the metal fraternity. It took Metallica two decades to convince the Glastonbury organisers that they should appear there and I’m not aware of a symphonic metal band (there are quite a few of them) ever headlining a major multi-genre festival. If I’m wrong please let me know.

For my money Nightwish is no longer a metal band anyway, it having clearly adopted progressive rock (prog) music tones about five albums ago, to generate what I call prog-metal. And I don’t know of any other band that so distinctly falls into that ‘category’.

So what’s so good about ‘Ghost Love Score’? Firstly, if it doesn’t raise goose bumps then you haven’t got any. From a fairly restrained, sophisticated opening it grows into a crescendo and then a climax that is almost orgasmic and blows your socks off.

Secondly, the arrangement, involving live instrumentation and recorded orchestral backing tracks, is co-ordinated to perfection. And that orchestration drags it all over the place while the central theme is never lost. It’s a ten-minute opera.

Then there’s the vocal contribution of Floor Jansen. Nightwish have been blessed with three of the leading female vocalists of their time during their 26-year existence: the powerful operatic chops of Tarja Turunen, then the more enthusiastic, pop-oriented Anette Olzon and latterly Jansen, who in the opinion of many is the #1 female vocalist in the popular music world presently on account of her phenomenal sonic and stylistic range.

Fortunately all three benefitted from the ability of chief songwriter Tuomas Holopainen to write specifically for their individual talents, which is one of several factors that set Nightwish apart from other bands.

On the album recording Tarja Turunen curtailed her vocal contribution earlier than Jansen does here, so that the outro rests with the choir. This version contains a prolongation of the chorus from Jansen, at her own suggestion, to the climax. I’m not sure it is any ‘better’ than the original but it does provide for a spectacular finale, live.

What is the song about? A score for a Ghost Love film? I’ve opted for ‘original sin,’ or at least transposed to a modern setting. Apart from the obvious line ‘Relive the old sin of Adam and Eve’ there are several others to suggest that.

Moreover, in the most-viewed video of the song, from the Wacken Open Air Festival in 2013 (not the one I selected here, but you can easily check it out yourself) the ‘sky’ changed from blue to red at the moment Jansen sang, with a dramatic key change, “My fall will be for you” (8:23 in the video here), suggesting the ultimate fall from grace into the flames of Hell.

And the eleven candles that preface the instrumental bridge have never been adequately explained. They might have a religious connotation, such as the participants in The Last Supper minus Judas Iscariot. What or who does the single remaining candle represent? Jesus? Iscariot?

Tuomas Holopainen is an acknowledged atheist, or at least he was; he tends to sit on the fence a little more these days as I would if my home village (and that of the band’s founder members) was 20km from the Russian border. But his songs are replete with religious references.

The video I chose for this song is from the band’s 2018 two-decade celebratory ‘Decades’ tour and the particular performance is from Buenos Aires, home to the bands’ most energetic fans. (Or perhaps they just heard that Messi scored a last-five-minute hat trick to beat Brazil!)

But I strongly suggest you go and see it yourself if and when you can. I remember the first time I saw it and I was totally spellbound.

(The entire concert can also be viewed online).