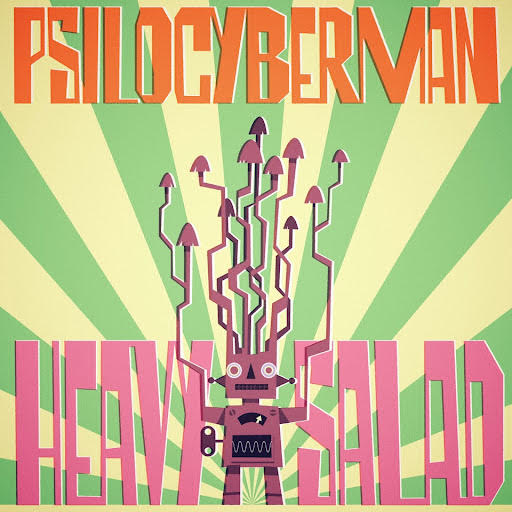 The very first Weekend Intermission featured a band, Tigerside, which arose out of the combined efforts of customers and owner of a well-known Salford (Greater Manchester) watering hole and music venue, The Eagle Inn. The owner, who has her finger in many pies, crops up again now, as a backing vocalist in the psych-cosmic oriented Heavy Salad, who in the main hale from the conurbation’s eastern side.

Heavy Salad comprises the core trio of Lee Mann, Rob Glennie and Allan Hutchison, who added Oscar Remers and vocalists ‘The Priestesses’, namely Ally McBoo, Esther Maylor, and Lucy Hope, along the way. That trio has a joint interest in psychedelic horror films, and aspired to the idea of being in a band “like a psychedelic cult” which is pretty much how it turned out, titling their debut album ‘Cult Casual’.

I recall that the bizarre and yes, psychy and cultish ‘League of Gentlemen’ radio and TV series started in much the same way and ‘Royston Vasey’ (Hadfield, Derbyshire) isn’t that far away from the trio’s abodes. Too many local shops, that’s the problem.

I’ve encountered Heavy Salad previously, in mid-2020 to be precise, with an early single, ‘The Wish’, which later appeared on the album. I identified them as “a Manchester band…there’s a theme running through Manc music from the 1960s and the likes of Herman’s Hermits and Freddie and the Dreamers via the ‘Madchester’ days of the 1980s through to the 1990s Oasis era and beyond. That theme is of lads having a good time, irrespective of the quality of the music they are producing (though that quality is generally very high). They even talk about having a good time in the opening line.”

Then, “Musically, it won’t tax you, a simple verse-chorus-verse-chorus-simple guitar bridge-verse-chorus-finish affair, but pleasant enough. The lyrics deserve a listen; they make a simple statement, simply. In fact the song is really perfect for the simpler times we’re living in right now, which I why I think it is likely to get airplay beyond Steve Lamacq” (who was plugging them on BBC 6Music at the time).

18 months or so on, what does ‘Psilocyberman’ tell us about their development?

They say it’s a song about “mindless cyborgs and mind-altering psychotropic substances; the tale of an ‘everyday cyborg’ who is awakened from his electronic trance using the magical powers of psilocybin (‘magic mushrooms’). He is aware! He feels the rhythms of the universe reverberate inside his mind!”

Hmm. Everyday cyborgs. I see them on each occasion I (rarely) venture into Oldham town centre. Well I suppose it makes a change from world weary ballads bemoaning love lost during lockdown.

Let’s put it this way. If you like your music to be fun, you can’t go wrong. And who doesn’t, after two years of this pandemic crap?

‘Psilocyberman’ follows a similar pattern to ‘The Wish’; the guitar riffs could be interchangeable. But what they’ve done with ‘The Priestesses’ – giving them a bigger role, and they harmonise delightfully – could be a masterstroke. It’s as if ‘Sgt Pepper’– era The Beatles had gotten together with Bananarama, you don’t often see anything like that, and it’s just the sort of eccentric Brit thing that the Americans love.

Does that matter? Yes sirree, it does, for it seems Heavy Salad are off to the South by Southwest (SXSW) festival in March in quirky Austin, Texas, which possesses the only airport I know of that puts on regular music shows for the passengers. Not only that; they are an official showcase artist. Break SXSW they say and you break the whole goddamn US of A.

We wish them well but temper our enthusiasm with historical precedent. It’s the beginning of the journey, not the end. Remember The Ting Tings, who mesmerised SXSW in 2008, who were going to be the next big things (tings?) and who used to practice in a Salford mill a meat pie throw away from the Eagle Inn (it might even be the one in the video here) before lapsing into comparative obscurity.

Prior to SXSW and after it they have a short UK tour, which kicked off at The Eagle Inn last Friday and which included an SXSW fundraiser.

‘Psilocyberman’ is the first glimpse of Heavy Salad’s forthcoming second album ‘Long Wave’, which will be released later in 2022. They are noted for working with established producers. For ‘Cult Casual’ one of them was Ross Orton, who has worked with Arctic Monkeys and Working Men’s Club, and this time out it is Stephen Street (The Smiths/Blur) who is well known for delivering experimental guitar pop, and Christophe Bride (A Certain Ratio).