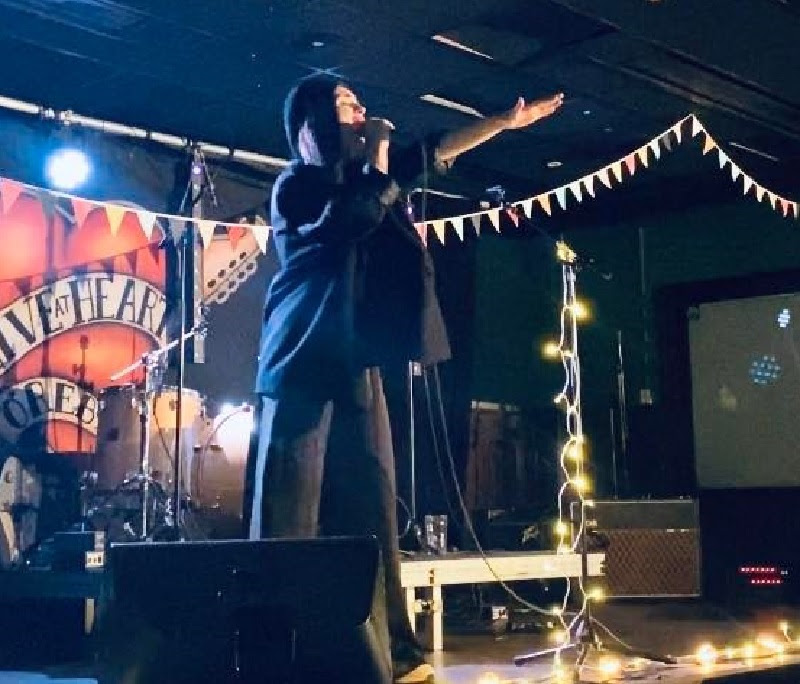 Too right it is enough.

Shayri (Viktoriia Bobal)is one of many refugees from war-torn Ukraine that have found their way to Sweden; traditionally a welcoming country in such circumstances. She’s 22 and from the Transcarpathia region in western Ukraine. She began her artist career in 2018 and her debut single ‘Vil’ni’ (‘Free’) was quickly picked up by radio stations in her homeland. Since then, Shayri has recorded more singles and music videos. In 2019, she was a finalist in a competition of the Ukrainian music TV channel M2, and last year won the music competition New Generation Spring 2021 with her song ‘Miami’.

Shayri (it means ‘romantic poems and prayers for love’ in Urdu I think) has already released a debut album of 13 songs and describes her musical style as a mix of Ukrainian pop, dance, and electro.

During her time in Sweden she has worn two hats. Firstly she has regularly participated in protest meetings, demonstrations, and charity concerts to support the freedom struggle in Ukraine. At the same time, she continues to create new music and actively works to popularise Ukrainian music abroad.

Last week, Shayri took part in the Swedish festival and conference Live at Heart at Örebro, one of Scandinavia’s biggest music events, where she participated in a seminar on Ukraine and the music.

Later, and on the following day, Shayri performed two crowd-pleasing solo concerts. The repertoire included ‘Vil’ni’ and ‘Miami’, but the strongest emotions were reserved for her latest single ‘ВЖЕ ДОСИТЬ’ (‘Enough is Enough or ‘Already Enough’).

She says that most of her songs are “about love”, but that this one is about the war and the emotions, pain, and sufferings that she “constantly feels every time the missiles are flying at our cities and peaceful people, innocent children die”.

She adds, “My heart cries and I beg Russia to stop this war against my native country!” Most of her relatives and friends still remain in Ukraine, along with her band. There is no prospect of her, or them, ‘giving up’. As she says, it’s important to all of them to continue creating music.

Shayri will continue to participate and sing at the weekly protest meetings at both the recently renamed ‘Fria Ukrainas Plats’ (The Free Ukraine Site) in front of the Russian Embassy in Stockholm, as well as other protest activities against the war. At the same time, she is currently working on making English translations of her songs, with the ambition to reach out with her music and her messages to the rest of the world as well.

In the Sebastian Malm film Shayri performs an emotional version of the Ukrainian national anthem and there’s emotion aplenty in ‘ВЖЕ ДОСИТЬ’ too, as you might expect. There are few songs that start with the sound of an artillery and missile bombardment. The only one I can think of offhand that features such military interjections is not a song per se but Tchaikovsky’s ‘1812 Overture’ and the sound of cannons therein is of Napoleon’s, directed at Moscow during the invasion, which is somewhat ironic.

‘ВЖЕ ДОСИТЬ’ hangs on some intriguing Middle Eastern style rhythms. Ukraine sits at the same sort of east/west melting pot latitude as Turkey and there are often cross-cultural vibes evident in the music as there are here.

Meanwhile her western pop and even dance sensibilities are never swayed, even by the gravity of the material. She is an entertainer after all and you are not going to go out and buy a dirge.

The western European ear might take a short while to become accustomed to this musical melange but rest assured you will do.

You know, I often comment on how well I think a song might do at Eurovision. I did it only a couple of weeks ago with songs from Sweden and Finland.

Forgive me but I’m going to do it again. It can’t be held in Ukraine next year and it’s heading to the UK instead (I reckon it will be Manchester). Ukraine won it in 2016 with Jamala’s ‘1944’, a song about the mass expulsion of ethnic Tatars from Crimea in that year and having broken the mould (political songs) I see no reason at all why this song of Shayri’s, which is every bit as good, couldn’t win it again, without any need for a ‘sympathy vote.’

For now, I’m looking forward to hearing the English versions of her songs. There could be a market for her here.