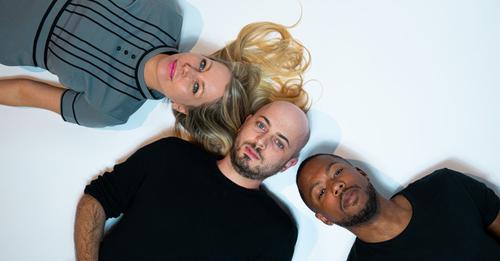 We’re a little bit behind with this one to say the least but I wanted to feature it because a member of Quantum Dot is Icelander Thorunn Egilsdottir, latterly of the softly atmospheric Luxembourg-Iceland duo When Airy met Fairy, of whom I’ve written on many occasions.

I don’t know if WAMF is still going. I’ve no reason to suspect they aren’t but Thorunn is anyway now a full member of Quantum Dot along with founders Lionel Jeusette and Patrick Ribeiro who started it all off in Brussels in 2014, creating a sound of traditional instruments to which they then added electronic instruments and digitally reworking the result.

There is an old saying, that ‘hell hath no fury like a woman scorned’ and there must have been plenty of scorning going on for the victim to have his bones broken in this song and accompanying video that looks like its straight out of the latest macabre Nordic Noir.

I mean, even Fiona Apple didn’t punish any of her many ex-es by keeping him in a giant cheese bell.

I wouldn’t have thought that Thorunn’s vocals would have been entirely suitable to the protagonist here. They are sweet most of the time and they don’t vary much here. But that sweetness demonstrates how even the fairest can have another face.

Perhaps there’s something in the water in Luxembourg, which often produces music that you wouldn’t expect from a nation of investment bankers. Much of WAMF’s work has been arcane and testing and Quantum Dot is carrying on the tradition admirably.

‘Breaking Bones’ was the first single from Quantum Dot’s EP ‘Random Casualties’, which was released on October 14th.