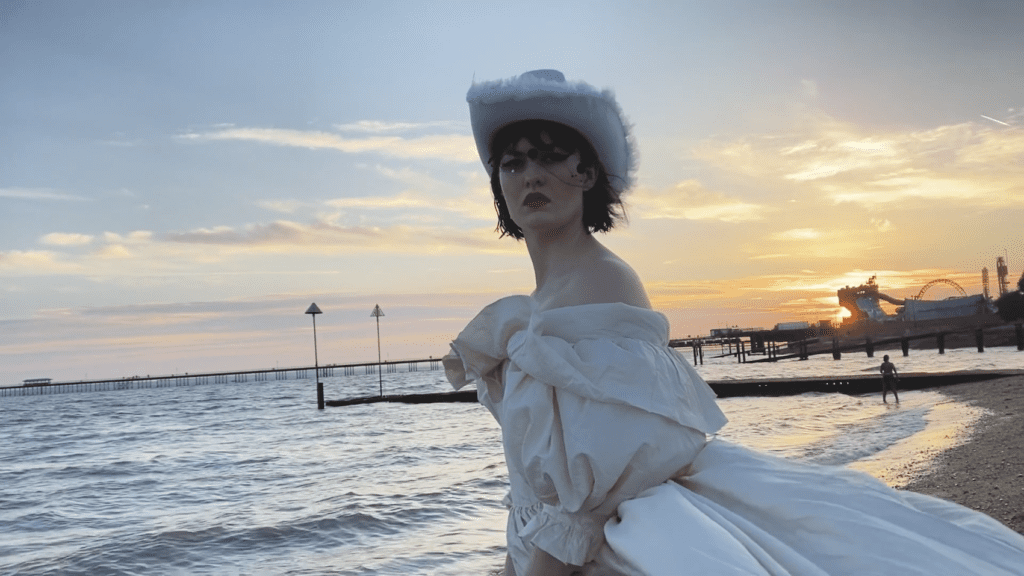 In the first Weekend Intermission we ventured to Salford and the lovable scallies Tigerside. Not a week has gone by and we’re back again in Manchester’s ‘other city’ (and the origin of many ‘Manc’ musicians)– or Weatherfield as it is known to those who watch Coronation Street – as local lass Ren Harvieu continues her comeback with this intoxicating single.

The word ‘comeback’ is more associated with sportspeople and politicians but it most certainly is with Ren Harvieu. If you don’t know her story (and you’ll want to look it up) I’ll keep it brief.

Having signed to Universal Records aged just 18 after being discovered through demos on Myspace, she started recording an album, ‘Through the Night’ released in May 2012, which reached number five in the UK charts. She was in big demand, being touted as the new Dusty Springfield (the UK’s top female vocalist?) but prior to the album’s release, in a freak accident, she broke her back, underwent a 14-hour operation which saved her from a lifetime in a wheelchair, or worse, and spent many months recovering under specialist care.

I saw her in concert a few years later and it was evident that something wasn’t right mentally. In all it took eight years before her second album, ‘Revel in the Drama’ was released; one that was co-written with Romeo Stodart of The Magic Numbers, but it was to considerable critical acclaim. In the meantime I saw her perform again, at the end of December 2019, a true diva, who had reinvented herself into a Goth-like persona, and with a vocal quality that even surpassed her prior capabilities. In one song she hit and sustained a note the likes of which I’ve never heard before or since from a pop singer.

Now, as if to emphasise that she is back to stay, Ren Harvieu has released this single in advance of a 15-date tour of the UK (details at the end).

She covers a lot of ground in her songs. Those on ‘Revel in the Drama’ include one penned to herself when she had no label and wondered if it would ever be heard; one about carefree teenage nights spent clubbing; and even one that’s an ode to Salford.

On ‘Cry on Me’ the subject matter is more potent – the long-term relationship which is on its last legs, going through its death throes and the ‘end of the world’ feeling that can accompany it. It was written, again with Romeo Stodart (who also played most of the instruments and produced the video) when both were going through difficult times in their lives, and it is one of the first they wrote.

She says the song is a plea for emotional truth and that she is “prepared to be the strong one.” The early part of the song could be a rapper’s paradise with multiple rhymes in quick succession and it is swiftly evident that the most-used word by far is ‘me’. Few songwriters would paint themselves as the guilty party in a relationship breakdown (Anna Calvi took a similar tack in her own ‘Cry’) and it is to Ren’s credit that she has chosen that path, if I read her intent correctly.

Vocally, Ren once again keeps alive the spirit of Dusty Springfield in this song, yet at the same time managing to evoke Karen Carpenter. She’s a mélange of so many other world class singers (I have in the past compared her to Shirley Bassey; she can belt par excellence) but she’s also definably herself, a product of the same tough Broughton streets that produced Elkie Brooks.

It’s an intriguing video too, shot in Southend, or ‘Salford-by-the-Sea with jellied eels.’ In it, she takes up a lonely residence in the Hope Hotel, which is then shown in reverse as if to say “Hope has left the building.” There are also allusions to the variety of false hope that inhabits places like Las Vegas, which is the name of the amusement arcade here and of the Stetson-like hats that Ren is wearing (or am I reading too much into it?)

Frankly, I doubt we have a finer singer in the UK than Lauren Maria Harvieu right now. It’s always good to hear her, and if we’re to have a female James Bond I’d be more than happy for Ren to be singing the theme tune to the next movie. (As a bonus, there is an extra video here, of her performing Bond themes at Salford’s Lowry Theatre).

‘Cry on Me’ is out now on Bella Union.