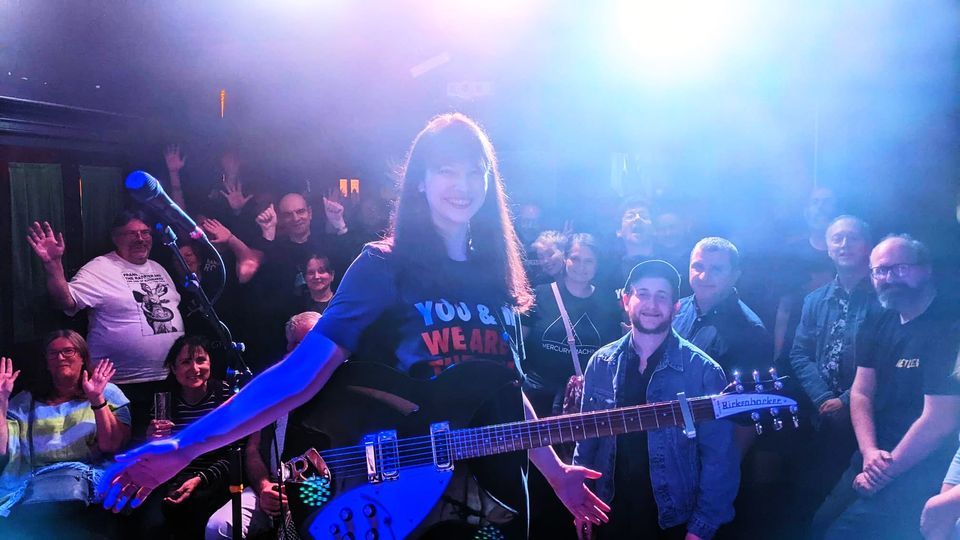 With Sheeran at The Etihad (Jeez, the traffic driving home…) 80,000 at Parklife to see Megan Thee Stallion strutting her stuff, and Alicia Keys and The Killers lined up for the following night, you’d have thought Roxanne de Bastion might struggle to get a quorum at The Castle.

She didn’t struggle at all and an enthusiastic audience which was enhanced by some hardcore touring fans including one guy she remembered from Glastonbury in 2016 was treated to an evening of utter charm, the sort you wish you could bottle up and take home with you. Roxanne – along with other band members – wears a T-Shirt insisting ‘You & me, we are the same,’ the title of her most recent album (September 2021). It isn’t an advert so much as a statement of intent and her show is life re-affirming; like a Sunday morning gospel happy-clappy without the happy-clappy.

She’s been compared to everyone from Dusty Springfield to her first influencers, The Beatles, to Dylan, Regina Spektor (she may have done a Spektor cover in the encore, if anyone knows for sure hit me up) and Fiona Apple. The last of those is what drew me in to watch an artist I was only vaguely aware of because Fiona can do no wrong in my book.

But that’s not what I heard. If comparisons are to be made at all I’d say she’s somewhere between the currently fashionable again Kate Bush (she even looks like Bexleyheath’s finest from a distance) and Emmy the Great, with the song-writing and storytelling panache, and the engaging personality, of both. And she has a smile that will slay you.

The show got off to a strange start with the opener, which I think was ‘Erase’ but the volume was too low and it was difficult for her and the band to build much atmosphere, while the often-repeated line from the next song, ‘Molecules’, “that might be God, they might have mislabeled that” can be a bit too much live, even when the crowd is singing along on invitation. It’s possibly a better encore song but a haunting piece of cello which isn’t audible on the recorded version provided more than adequate compensation.

Roxanne is at her best with her ballads and a succession of them followed, starting with ‘Wasteland’, focused on her home city of Berlin, from the time the Wall came down and its aftermath, and ‘Run,’ which concerns her grandfather who, if I read the lyrics correctly, about trains going east and the need to run in the opposite direction, was caught up in the Holocaust.

Ditto ‘Heavy Lifting’, a song title that could be one from a Bush album, which concerns the passing of her father, and which she introduced with a smart observation about grief and love being the same thing. A beautiful song and one delivered to perfection.

Variety could be her middle name though. ‘London I miss you’ – a brave song to sing in Manchester! – could be a lullaby yet it was rounded off with an astonishing instrumental outro, the product of cello, guitars and synthesized effects – I’m not certain how they did it from my perch at the back – one that will long linger in the memory.

Meanwhile, ‘The Weight’ could be lifted from a soppy Pixar movie as WALL-E goes to robot heaven or Woody rides off into the distance.

The show was rounded off with ‘Red and white blood cells’, another thumping sing-a-long. Together with ‘Molecules’ I wonder if Roxanne has a scientific background. She should be songwriting with Dr Brian Cox. (D:REAM-on, Dave).

She returned for a three-song encore, one of which was delivered acapella and which was made up on the hoof as no encore had been planned. I’m reminded of a story Steve Harley tells about one of his first gigs with Cockney Rebel when they played just six songs and when the promoter asked them for more Harley said, that’s your lot, we’ve only got six!

Roxanne in contrast has a growing catalogue and an excellent selection of it was performed tonight, by a band that was remarkably tight considering the lack of a rhythm section for most of the show. If I was being picky I might say that the live sound might benefit from being fleshed out on some of the songs but that would unnecessarily detract from one what was a thoroughly enjoyable show, one that ensures I’ll be paying much more attention to Roxanne in the future.

A quick word about supporting artist Jenny Colquitt, who is from Widnes, home to Sporty Mel C of course, and whose repertoire includes a broad swath of indie pop and folk with a dash of Americana, delivered with cutting observational lyrics. Wearing a fabulous blue (under the lights) fedora her voice is even more fabulous, reaching some notes I haven’t heard since the last time I watched Ren Harvieu. Definitely one to watch.

The show goes on at Crofter’s Right’s Bristol (11th June); The Brook, Southampton (12th); Horn at St Albans (14th); and the Lexington, London (15th) then moves into Germany in August. No Nordic dates at the moment.