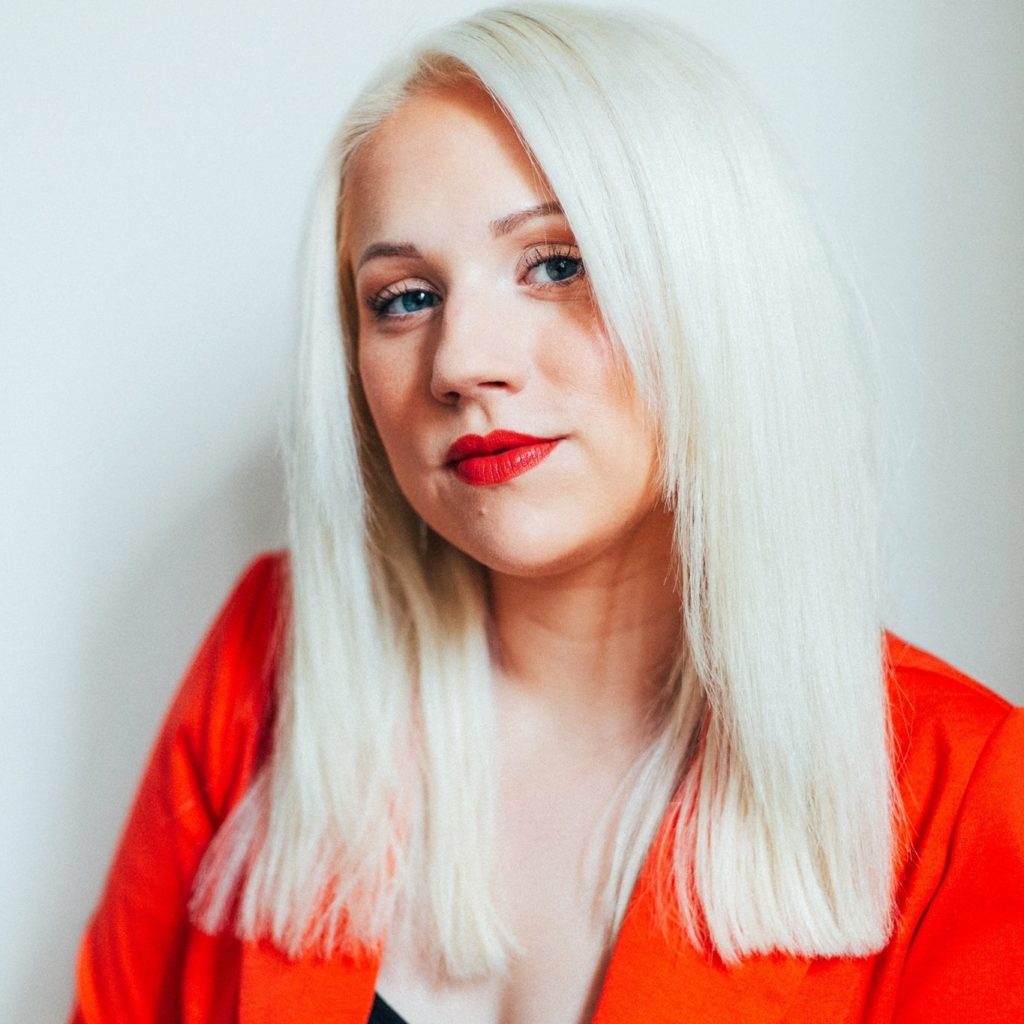 The Northern Lights are more properly called the Aurora Borealis of course and owing to a huge solar flare last week we could actually see them in the UK. Except that we couldn’t of course because the sky was its usual uniform March grey with cloud cover down to around 10ft.

But to more than make up for that here’s another solar flare, from Sweden this time, in the form of BINA (Sabina Larsson). The young singer/songwriter/producer from Uppsala, north of Stockholm, put a great deal of time and effort, not to mention financial resources, into making this video in Swedish Lapland up in the far north of the country. I suppose it might be a better known area to us if Finland hadn’t cornered the ‘Lapland’ market with its faux Santa Clauses in Rovaniemi!

‘Northern Lights’ is BINA’s first video but second single (the first was ‘Masks of Comedy’ ) for the Swedish label COMEDIA. The video is released today, 24th March, and the single on 8th April. The video was commissioned by the Swedish Facebook groups “Vi som älskar Norrland” (in English: “We who love Norrland”)” which has 86,700 followers and “Norrland. Ett eget land” (“Norrland. A country of its own,” with 143,803 followers.

I did a little research on Norrland. It seems it isn’t an official province as such these days; rather a ‘historical’ one with cultural connections and some parts of it have their own dialects. I imagine the social media groups exist to keep its spirit alive like many do in places like Yorkshire and Cornwall in England, or the Welsh language supporters.

But you didn’t come here for a geography lesson. BINA started singing and performing as a small child, in school plays, and in her grandparents’ house and when she discovered John Lennon in her teens there was no looking back .Having said that, her inspirations cross the entire musical spectrum and include Billie Holiday; Monica Zetterlund, the Swedish jazz singer; and Queen; as well as Sámi music (from the pan-national region which encompasses large northern parts of Norway, Sweden, Finland, and Russia); Finnish tango (which I didn’t know existed); Arabic music; Disney hits; and French classics.

She also studied music theory, physical theatre, classical theatre, improvisational dance and voice technique before moving to Stockholm and setting up her own production company, Sabina Productions. Latterly she’s been involved in the capacity of an artistic event planner, with a focus on art exhibitions in Stockholm.

BINA’s something of a cultural polymath and that’s evident in the excellence of the video here, even down to the patterns in the snow that the two main characters pick out with their dance, which suggest in could be an arcane message in some obscure Sámi dialect. There’s been no skimping whatsoever on that quality and she’s directed it all herself. There are several Swedish female artists who have perfected the skill of allying graphic, meaningful videos to their songs. I’m thinking of the likes of Elina and Skott particularly. All the evidence here suggests that straight from the get-go BINA is right up there with them.

And what about the song? Don’t expect it to leap out of the screen and slap you in the face. It isn’t that sort of song, rather a sophisticated slow burner that will ingrain itself into your consciousness over the course of two or three hearings. I think it tells the story of some kind of reconciliation but it’s sufficiently vague to be open to interpretation.

And I like the insertion of a few lines in Swedish; for a foreigner they add to the mystery.

What I like more than anything about BINA though is her attitude and work ethic. She says, “Before each project I take on, I go in with the same attitude: How high is the ceiling? How do we get there? Here we go! People ask me if I’m an artist, project manager, gallery owner or what I really am. I would mainly like to describe myself as an artistic “doer”. What I do not know, I find out. The people I am curious about I contact. And I, only I, set the bar for my goals. I am driven by daring to try and surprise.”

I don’t think it is too daring for me to suggest that BINA’s name will soon be up there in Northern Lights.