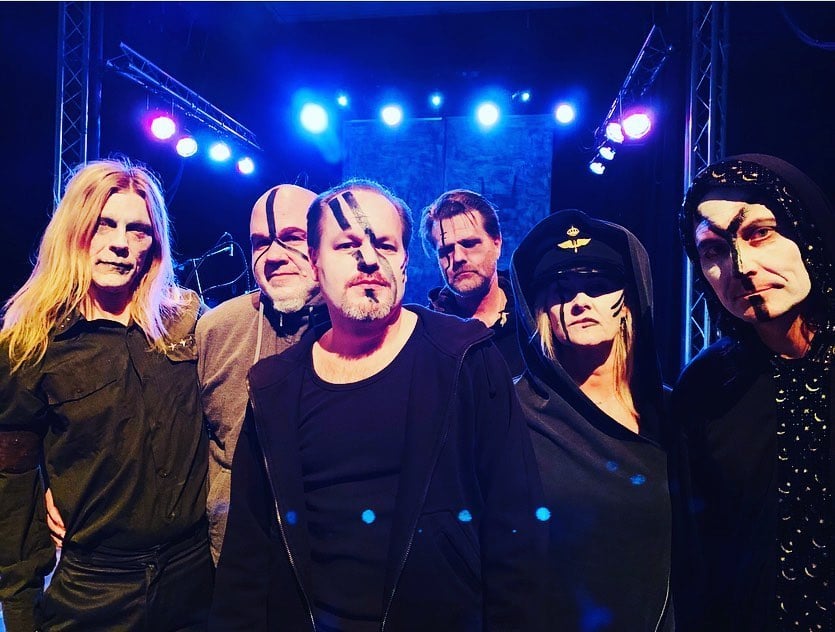 First time in NMC for Xinombra and as is often the case there is a story to tell.

I saw them at a festival in Sweden a few years ago before I’d heard them. They use some bizarre on stage props and they almost burned down the venue. (You can see it for yourself, at another gig since, on their Facebook page, in the 30 June pinned post).

Created ad-hoc out of three other bands like yesterday’s Swedes The Brides of the Black Room and fundamentally an ‘arty experimental metal’ (my phrase) band, their last song of theirs I heard ((‘Tack Himmel’)  was more in the way of krautrock.

Their artiness was on show in that last song, which was based on an Edgar Allan Poe poem, while they’ve performed a rock musical set around Swedish Nobel Laureate’s Harry Martinson’s epic sci-fi poem ‘Aniara’. They’ve also written songs based on works by Gunnar Ekelöf, Edith Södergran and Charles Baudelaire.

So it should be of no surprise that this song hangs on Mare Kandre’s novel ‘Aliide, Aliide.’

Mare Kandra, a Swede of Estonian descent, was a musician and writer. She sang in the early 1980s first in the punk band Kramp and then in the more experimental post-punk band Ruhr and Gothic/New Wave Global Infantalists.

She achieved considerable acclaim as a metaphysical writer in Scandinavia, pairing existential themes with contemporary social issues and influenced by Gothic fiction, and her works have been translated into many languages. She’s been compared to both Kafka and Dostoyevsky.

Her novels, short stories and prose poetry often deal with children’s, and in particular girls’, development to adulthood; women’s roles and the expectations placed on them; how alienation develops; and marginalised and traumatised individuals who opt to break with society’s expectations. Aliide, Aliide, from 1991, is considered by many as an autobiographical novel about her own growth.

She’d probably be in even greater demand if still writing now with subject matter like that but she died on 24 March 2005 of a prescription drugs overdose, aged 42.

This song, ‘Staden’ (‘City’) is a first taste from Xinombra’s forthcoming album based on Aliide, Aliide (January 2022) and taking its title.

Aliide, Aliide is a dark story about a person who becomes melancholic, desperate and “out of themselves”. She is separated from the reality of other people and instead experiences a dark Gothic world. Her psychological experiences of the world transform the real environment into mental gothic imagery and the whole world appears Gothic in her head. Aliide is eight years old and it is her experiences, behaviour and thoughts that Xinombra attempts to create with its music and performing art. I interpret that as meaning the band won’t be setting fire to anything or grappling with something that looked like ‘The Alien’ as they did when I saw them.

And so, at length, to the song. Unfortunately the lyrics are in Swedish, I haven’t a clue what they’re about and there’s no lyric sheet. So I’ll focus on the music. How best to describe it? Well in the main it’s post-punk in the truest meaning of that phrase, the rawness of punk mixed in with an avant-garde influence, in this case melancholic Goth. It throbs along to an insistent guitar riff and a bass line like a machine gun.

If you can imagine, let’s say, Public Image meets The Cure meets Siouxsie and the Banshees ft. Poly Styrene, then you’re part way there.

I get the feeling there’s a lot of imagery built into the lyrics. I believe this (from the PR) is an example:

“The station was drawn deeper into the night, and in the square, in all open places, on every street, the strong night silence spread.

As she went there, the city turned into a bottomless abyss, labyrinth abyss… “

And it’s for that reason that I’d urge the band to publish their lyrics, preferably in multiple languages. A few nights ago we featured another Swedish band, Le Lac Long 814, which is from the same area of Central Sweden but so utterly different to Xinombra that they make ‘chalk and cheese’ seem like ‘two peas in a pod’.

But I could understand every nuance of LLL814’s work courtesy of abundant written lyrics and for a band like Xinombra I’d recommend they do the same thing.