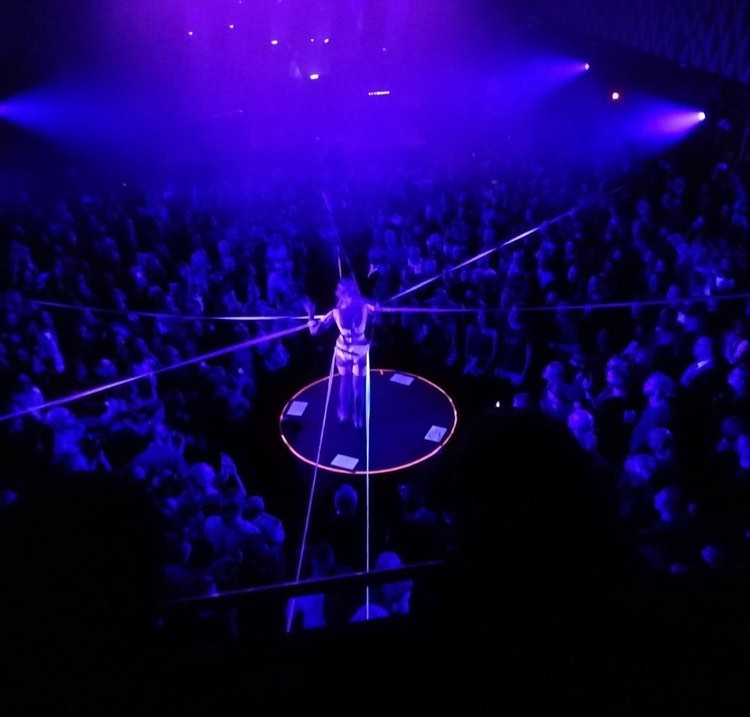 In the latest of a rapid-fire series of ‘Archived’ articles this is an interview I did with Danish artist Lydmor (Jenny Rossander) in December 2019.

It isn’t a normal interview. She was on tour in Asia and specifically in Vietnam when she received this by email, remarkably turning it around in less than nine hours and with some pretty well thought-through responses.

Lydmor has since gone on to release her fifth album, ‘Capacity’ and to get the international recognition she deserves.

Reprinting this interview also gives me an opportunity (at the end) to feature my favourite song of hers (and one of her first ever to be recorded), ‘Lamppost Light.’

When I first saw you perform live in the UK, last year I wrote a ‘summary’ of your characteristics as I saw them, which included, “A nice girl; a fun girl with an unconcealed joie de vivre; but one with just a hint of attitude. Thoughtful, intelligent, caring. Slightly bonkers.” In a paragraph, how do you see yourself?

“I either connect deeply or not at all” -Anais Nin

I will always love Shanghai, the way the city invaded me in 2016, it did so in a way that means it will never leave my body completely. I’ve been back there a few times since then and it is always a very moving experience. Going to Shanghai to make an album was a part of quite a big change for me, personally as well as artistically, a change that was brought about because I was in a bad place. Currently I am not in a bad place, so I feel more free to explore different kinds of inspiration sources. Cities in the world as well as poetry, emotion and personal development. Music comes quite easily to me right now. It’s nice!

I will never be able to tell you, or anyone, the real story of Claudia. She exists. There are many secrets involved with her, some of them mine, some of them someone else’s. There is of course another layer, as the end of your question implies, but as per usual in my life reality and fiction intertwine themselves in a series of symbols and signals and signs.

I don’t feel like it is different personas per say. It is just me, doing different things. Playing the piano is a big joy for me, I love that instrument, but I don’t go into a different head space than when I play piano. It all draws from the same place inside me, the place that wants to connect, to swim in the ocean of music.

Ooooh, Trond is such a special Talent. I love working with him. He has a beautiful intricate mind, and he is so soft to work with. I think it was absolutely perfect for the place I was at when making the Shanghai album. I was developing a whole new way of thinking about my music and working with it, and Trond was such a great partner in that journey because he is a great person and really cares about the ones he works with.

hahahaha I did?? Maybe it was part of that looooong genre description I made once that has sorta followed me around since then. I guess I just consider myself a feminist. I spend a lot of time thinking about gender, what it means, what it does inside of me, how it works in society. It is one of the most subtle yet powerful things that move a lot of things in our civilization without us knowing it.

I feel like all shows are an equal interaction between me and the audience. I know that for some musicians it’s different, which I have complete respect for, but for me, the whole thing goes on in the connection. The beats, the sounds, the lights, are just tools in that process, tools that can create more intimacy or authenticity between me and them.

I always get really, really shy RIGHT after the show ends. Like, when I run out of music, I feel suddenly extremely exposed, like I’ve just shown people every single cell in my body and suddenly I don’t have the art to hide behind, and I just want to get away from the stage as fast as possible. Therefore the running 😉

Hmmmm…. I wouldn’t say role models per say. Not in the music industry. I am aware of what other people are doing, and find it cool and inspiring but I don’t like clinging on to a specific person when deciding what I’m gonna do. I think the closest I have to a role model right now would be the author Siri Hustvedt. She is so clever, yet sensitive and emotional, and I just feel like she has found the right balance in so many areas of her life.

I like writing about Money, as a concept, as something concrete and as a symbol. Money is so much more than money, it is power and it is used to control people. And that’s where it gets interesting. What is control? Is love a form of control?  I think that when I use the word money is my songs, I am actually mostly singing about power, and the dangers in the wrong kinds of power. I feel like the patriarchy and the capitalist system are deeply related, and probably the reasons for 99% of the world’s problems. Human greed and power structures.

It’s really different! Sometimes it’s a whole song that arrives together, and sometimes I’m just playing around with sounds until something arises. I like to say I create “with a sledgehammer”. Because my process is messy and chaotic and I just throw everything I got at the stuff I work with, until it starts to do what I want it to.

I do. Both. Quite a lot. Might release a book some day, I’ve got soooo much text lying around on my computer. But it’s not something I am in a hurry to do. Right now my writing is just for me, and that’s fine.

I gotta say I am quite happy in Copenhagen (when I actually get to be there, the last few years my tour and work schedule has been quite crazy) these days. I have gotten a really wonderful circle of friends that are all doing really amazing things and that I have great inspiring conversations with. So I probably won’t leave for a while. But life is long, and of course I am gonna be living in other cities at some points. Next year I’m gonna spend 2 months in Oslo for the Shakespeare thing and I am quite excited about that. (Author’s note: unfortunately that did not transpire due to the pandemic).

Haha multimedia person. Funny expression. I mean, when I work with theatre I do it AS a composer, so it doesn’t really feel like forsaking music. Music is probably gonna be at the core of what I do for the next many years. It’s my favourite medium and it is where I am best. But I must admit the theatre world is really a place where I swim freely and feel extremely comfortable. Amanda Ginman (director, Denmark) and Runar Hodne (Director, Norway) are not only people I collaborate with regularly but also close friends that I spend a lot of time talking about creativity with, so it would feel weird not to keep working with them as well.

That all depends on how the album goes! I haven’t had a lot of success in the UK yet, and getting a more permanent audience in other territories has given me the freedom to not go where I am not wanted. But if it’s possible I would love to come back!

I honestly try not to think too much about “success”. It really does you no good in any way. I focus on creating my babies in the best way I can, and sending them out in the world in the most loving and caring way. The rest is up to the world, not me.

I’d love to do something with Rezz as some point, I think she’s quite amazing.

Wow. Good question. Well, firstly realize that giving up is a legit and not-embarrassing course of action. This lifestyle is hardcore as fuck and if it’s not for you, then it’s not for you. If you don’t wanna do that, then my only advice is cling to your art. Forget everything. Focus on getting better, making more interesting things. Let your work become your anchor your everything. Read Just Kids by Patti Smith. Learn new languages. Learn new instruments. Do online tutorials. Read poetry. At some point your output will become so undeniably interesting that the world will start to notice.

The album title is gonna be way shorter and easier to remember.

No. That’s really not something I am interested in, in any way.

I’d love to be in academia. Studying literature or philosophy. Becoming a professor. Spend my days reading and thinking. Maybe I’ll do that some day.

And here is Lamppost Light, which I think was on her first album, ‘A pile of empty tapes’ (2012) but it’s hard to locate that album now. I believe she was around 20 when she wrote it but in this video she looks more like 14.

I saw her perform it at Iceland Airwaves as mentioned above and it was spellbinding. As she’s got older the emotion she puts into it has intensified and there were people literally in tears. And the lyrics are pure genius. Just take the opening three lines:

‘Somewhere in the dark a taxi drives, they lost their way; so insincerely

I could be fun like rollercoaster rides, somebody says; and walks away…

Can’t go home; there’s another tone of voice in the door phone’

It says nothing and everything at the same time. It is up to you to picture the scenario. She simply provides easel, brushes and paint.