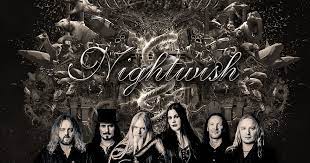 From the Archives is a collection of articles previously written by David Bentley and published elsewhere.

This one is a review of the December 2018 live performance by symphonic metal rockers Nightwish at the Manchester Arena. At the time of writing it remains the last live show by the band in the UK. The next one is 18th November 2021 in Birmingham.

I’d never seen Nightwish prior to this show. As a result of it they became my favourite band.

The review was first published in God is in the TV in my section Nordic Music Scene.

Nightwish pitched up in Manchester for their last foreign performance on a World tour that began 75 shows ago in Atlanta on March 9th, before returning home to Finland for the final two. You’d think they’d have got in enough practice for this show by now. They had.

They were in town on their 20th anniversary ‘Decades’ tour, in support of their seventh compilation album of the same name. The tour has a one-off unique set list, featuring critical songs from along their career path and some rarer songs from previous eras. One of them was ‘The Carpenter’ an obliquely religious song introduced by guitarist and pipes player Troy Donockley as “written in the very first decade in more ways than one” which views the Crucifixion from the point of view of a third party, possibly the Virgin Mary or Mary Magdelene. Deep stuff. It was the only single from debut album ‘Angels Fall First’ in 1997 .

The way the three young women sat to my left reacted when they realised what was coming, Jesus himself might have walked on stage. I doubt any of them was old enough to have been born when the band started up.  Nightwish have hugely devoted fans. I just became one.

I don’t know about decades but I’ve spent the last 24 hours searching for the superlatives needed to describe this show.

But for as long as I can remember I’ve wanted to see Nightwish, which I used to think was a cough medicine. That was on the strength of a video I came across randomly years ago featuring the Finnish symphonic-operatic ‘soft metal’ (my phrase) rock band performing their spectacular version of the title song from ‘Phantom of the Opera’, which should be required viewing on every music degree course in the country as an example of cross-genre optimisation. Or whatever. It is awe-inspiringly impressive. So much so that I include the video link at the end of this review even though three of the personnel are different now and they don’t even play it live these days.

Part of the reason for that cover’s popularity, as Nightwish fans know all too well, was the then presence of the unbelievably talented three-octave range lyric soprano Tarja Turunen, (who is no longer with them, after being “dismissed” immediately after that filmed show), her voice matching perfectly that of Marco Hietala, in what is undoubtedly the most striking version ever produced of that song.

Since then the band has had two front women, firstly the Swede Anette Olzon, and then the most recent, the Dutch Floor Jansen, who led it vocally tonight.

There is a fascinating YouTube video in which a voice coach, Mary Z, explores the different styles of those three singers; their different tones and timbres. Her conclusion is that Floor Jansen is more of a ‘rock soprano’ and that her ‘belting’ style suits Nightwish’s more recent product.

So, all eyes on Ms Jansen tonight, though you can hardly miss her. Tall, straight-backed, statuesque and tattooed, she looks like she could wipe the floor with Tyson Fury if he was foolish enough to get fresh with her, if you’ll pardon the pun. She towers over guitarist Emppu Vuorinen like he’s a garden gnome. But what a voice, especially when she hits the high notes towards the end of the show; fully vindicating Nightwish’s decision to employ operatically-trained vocalists. Amy Lee on steroids.

I worry about how often and vigorously she twirls her head though (the ‘windmill’ as they call it), I thought it might fall off at one point.

The show opened with a piece of seductive Uilleann Pipe-playing by Troy Donockley, Nightwish’s joint-latest recruit with Jansen, making them a six-piece, and who adds an Ian Anderson-like quality to the band.

But for all the beautifully co-ordinated noise they make when it gets going there could be a full orchestra up there.

What strikes you immediately about Nightwish is the disparity between the intensity of their songs and their laid-back style. They aren’t regarded as ‘symphonic’ for nothing, all their songs are complexly crafted but I didn’t hear a single bum note, vocal hiccup or straying out of time at any point in the near two-hour show. After 75 of them you might expect fatigue and boredom to have set in at least but there was no sign of it.

In contrast, they amble around the stage as if they’ve just turned up at their own local bar for a jam. I’m particularly fascinated by Vuorinen. When he isn’t strolling around chatting with main songwriter Tuomas Holopainen at his peculiar upside-down keyboard, or with vocalist/bassist Hietala, he’s at the other end of the stage casually nattering with the audience or pointing at someone and making friendly gestures. He needs to be fitted with GPS so you know where he is. All the time though he’s effortlessly playing some awesome licks.

Then there’s the melody. There isn’t a single song I heard that didn’t have a powerful tune. Add to that the tremendous emotion they create in many of their songs. I noted in particular ‘Gethsemane’, ‘I want my tears back’ and ‘Last Ride of the Day’ and they all came long before the fantastic climax to the show. I could just have easily noted “all of them give me goose bumps”. At one point I doodled “Songs of Praise”. Being neither an aficionado of that TV programme nor even particularly religious I’m not at all sure what I meant by that, I can only assume I was overcome by the spirituality of the occasion, and I choose that noun advisedly.

I don’t know what the Finnish is for filler but Nightwish don’t do it.

You also get a visual feast with Nightwish. The most interesting part, if you have the time to watch it (but you haven’t really, they should put it on a DVD), is the multimedia backdrop presentation, with each video or still representing a section of a song perfectly. It even ebbs and flows down over the stage along with the mist, and is crystal clear. A magical mystery tour of the universe. For example during ‘10th Man Down’, an anti-war composition, we were taken on an aerial tour of what seemed to be every war grave in Northern France and Belgium. It’s quite overwhelming.

Then there are the pyrotechnics, which include flames you could probably feel the heat from in Helsinki (and which are a little overdone in my view, they quickly became passé), and industrial strength fireworks of the kind that illuminate Sydney Harbour Bridge on New Year’s Eve. The final explosion was so loud it left some people looking visibly nervous. I’m sure I don’t have to explain why.

And so the finale, which is a compilation of various “chapters” of the 21-minute concept piece ‘The Greatest Show on Earth’ the closing track on their most recent album ‘Endless Forms Most Beautiful’, and which bookend the powerful ‘Ghost Love Score’.

This last half hour or so was replete with symbolism, from the title of the concept piece itself – you could believe you were watching “the Greatest Show” right here and now, just as ELP welcomed us back to “the greatest show in Heaven, Hell or Earth” in ‘Karn Evil 9’ or British Airways would have us believe it’s the World’s favourite airline. There’s no harm in shouting about yourself if you believe you can justify it, even though they aren’t; the song is about evolution and the gift of life.

Or Floor Jansen’s entreaty to the audience to sing “we were here!” at the finale, a tremendously potent piece of work.

You could argue that Nightwish’s work becomes a little bombastic at times, just read the lyrics to ‘The Greatest Show on Earth’ for example, but there’s no argument they are peerless at creating atmosphere at live events. Indeed they don’t so much create it as live in a stratum of their own into which you are invited for a couple of hours.

To top it all the sound was the best I’ve ever heard in the Arena, a venue that does not have the best reputation in that department.

Having had time to reflect, this was quite possibly the best live show I’ve seen, and fully merited the standing ovation it got. It was certainly the best at the Arena, amongst a bunch that includes seminal James shows and Arcade Fire in their mid-2000s prime.

It wasn’t perfect of course. Drummer Kai Hahto dropped a drumstick. Twice. And once hitting Marco Hietala in the eye.  Still, you can’t have everything.

(As promised: ‘The Phantom of the Opera’. From 2005. Vocals – Tarja Turunen, drums – Jukka Nevalainen, currently on hiatus owing to a medical condition).

Support act Beast in Black are more of a traditional metal band, with a drummer, Atte Palokangas, who should be in Cirque Du Soleil. He can’t go more than a few seconds without juggling a drumstick around his 10 cymbals. When he isn’t bashing himself over the head, that is. He’s the nearest I’ve seen to Animal in The Muppet Show. And the singer, Yannis Papadopoulos (Greek, I guess), has a higher voice then his looks suggest and a habit of leaving the stage every few minutes. Perhaps it’s the effect of Holt’s Bitter on a weak bladder. They are pretty tight and their best song was actually a ballad, of all things. If they can support Nightwish around European arenas they’re good. They will do a headline tour next year and some UK dates are on the cards. I’ll enquire about a show at Whittles. But they’ll have to do something about the band’s name; it’s just not weird enough.