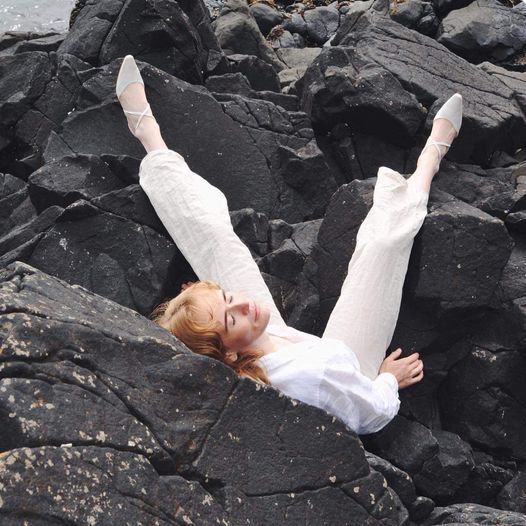 I came across the peripatetic FRUM (Jenný Augustudóttir Kragesteen) again earlier this year. Originally from the Faroe Islands she moved to Germany and latterly to Iceland. Listening to that song (‘The Only Way’) I wondered out loud why it wasn’t the Faroe Islands’ Eurovision entry, assuming they partake in that annual jamboree.

This one is completely different. It wouldn’t get past the intern who vets the Eurovision entries but that’s no bad thing.

The way it starts I thought it was being played backwards. And there’s little in the way of form or substance to it thereafter, either. She says, “I wrote this song to process the different emotions I have been through since I released my first single. Things changed right away and the possibilities that opened for me were a bit overwhelming.”

Well she must have been through the mill emotionally judging from the way it turned out. And there’s an intriguing, key line, one that Freddie immortalised, “the show must go on”, which hints that those swirling emotions were perhaps not all positive ones.And yes, I suppose that ‘Tumbled’ is a clue to that as much as ‘Tilted’ was to Christine & the Queens’ song.

It’s held together by the sort of obscure but striking off-beat rhythm that the Australian Gordi often comes up with (but few others that I can think of, off-hand) and played with the panache of someone like Manu Katché, and there’s a distinct Middle Eastern flavour to the melody line.

Vocally, she has exactly the right voice for this variety of ‘am I happy or sad – you decide?’ song and there’s an ever so slight hint of Regina Spektor in her enunciation. Bloody marvellous.

The first time I heard Frum, a couple of years ago, I had some reservations but I’m quickly starting to see her in a different light altogether, as a very inventive writer, one whom I’d class along with her whackier but equally talented compatriot,  Brimheim.

The music video for ‘Tumbled’ incidentally was been created and edited by Frum and Billa Jenný Jónleifsdóttir.

‘Tumbled’ is out now on hfn music.