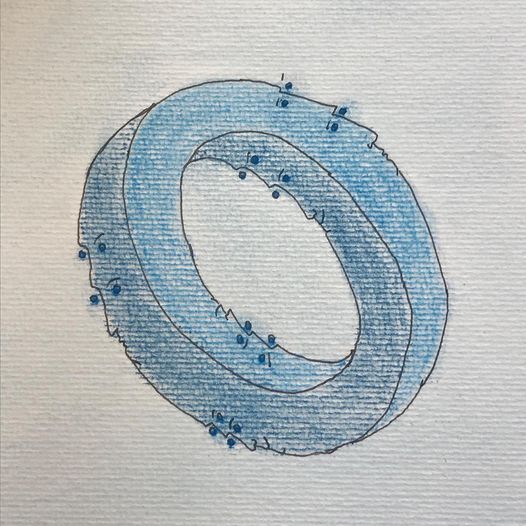 If you haven’t encountered them previously Le Lac Long 814 is a project of two Swedes, Bengt Söderhäll (a poet) and Daniel Östersjö (vocalist/musician), who have a penchant for the traditional ‘Chanson Française’, which originated in the 1920s and 30s, peaking in the 1960s. When I say a ‘penchant’ I mean that they are keeping the style alive, even though they’re in a small town in central Sweden, a couple of thousand kilometres from the Parisian walkways and the haunts of Piaf, Gainsbourg and Montand.

They have been releasing singles and and a previous album (in 2018) while working on the grand project as a whole, culminating, for now, in this latest album. It’s evidently a labour of love and the supporting artwork that goes with it, which I’ll mention later, is from another world.

It’s a long album at 17 songs so I’ll forsake my own usual track-by-track review style or this would go on forever.

There’s more variety than perhaps you’d expect but ‘Chanson Française’ is a broad church. Generically there is a restrained mournful tone, in line with the nature of the genre but occasionally it explodes in an unanticipated display of emotion. Lyrically, the sensation is of poetry transposed into song rather than of song lyrics per se. There are several practitioners of this craft in Central Sweden and it’s an art form I’m glad to see being persevered with.

The other generic observation I’d make is that you can listen to any individual track and know instantly that they believe implicitly in what they are doing. These two guys are no wannabes.

Oh, and it appears to be what I used to call a ‘concept album’. I’m not sure if that phrase still exists or, if it does, whether it has the same meaning today, but ‘Le Lac Long’ appears on several songs as if they’re purposefully returning to it as some form of metaphor or allegory, at least four of them, while the title, which translates into ‘floating shards’ evokes the image of something which is both benign and dangerous.

Some of the songs, the opener ‘La Casquette’ (The Cap) in particular is desolate even to the point of the traditional Portuguese fado. L’ombre d’un bourdon (Shadow of a bumblebee), which follows it, is even more mournful, verging on Edith Piaf territory.

Elsewhere, one song in particular, ‘Maman’, is more of a traditional ballad with spoken voice parts (and ‘Flytande skärvor’ is recited – entirely in Swedish), but then suddenly erupts into life in the form of ‘the blues’.

Grave ta marque has more of a Spanish flamenco feel while several songs – I noted ‘Plus de Toi’, ‘Tessons Flottants’ and ‘Mossan’ are more upbeat and carry a catchy tune, on acoustic guitar or even violin. Those are the instruments which predominate, supplemented by piano, mandolin, and (on ‘Tessons Flottants’) organ played almost in a prog-rock style.

I even managed to identify (because I can’t help but do this) several bands or artists to compare them with, as bizarre as these comparisons might be. For example The Stranglers and Plastique Bertrand (!) on ‘La Vie’, Carter USM (!!) on ‘Le monde et nous’ (the accordion part, so redolent of their ‘England’), and Jethro Tull on ‘Tourbillons du miroir’ (if it was speeded up).

I couldn’t blame you for thinking I’m making this up but I assure I am not. While you will hear what you hear and it might be completely different to what I hear what I can say for sure is that every time you listen to it you will hear something new. It is that well crafted.

I watched The Exorcist on TV over the weekend, the second time the BBC has shown the classic, once-banned demonic possession movie in a week, and now digitally re-mastered for even redder blood and greener pea soup oozing out of Regan’s mouth. The BBC’s film critic Mark Kermode made an entire programme about how every time you watch it you see something you hadn’t seen before and it’s exactly the same with what you hear on this album.

And that’s without mentioning the lyrics here, which are sumptuous and highly evocative. Take this random example from ‘Le monde et nous’.

Will Shakespeare eat your heart out.

I have to say something about the work these guys put in to support their songs and this album. On three occasions now I’ve received packages through the post, each one of them a miniature art exhibition of relevant images on small cards, together with song lyrics in multiple languages; Swedish, French, Danish and English and all very tastefully produced. I can’t readily think of anyone else that puts in this degree of effort. And while it acts as ‘marketing’ it is much more than that, contributing to a multi-media experience.

M. Macron should stop whinging about Brexit, fishing rights and submarines and improve France’s Entente Cordiale with Sweden by getting this album played on Ėlysée Palace Radio. It’s a work of art and there should be a place for it in the Louvre. They could make some space by throwing out that old, tiny, tired, over-rated painting, Lisa somebody or other.

How do I sum this work up? This exploration of society through song and verse and through which they paint their subjects as effectively as did any Renaissance Master.

Let’s put it this way. Every Sunday afternoon I take a 30-mile (50km) round trip drive to a little town called Hebden Bridge, population 5,000, about half way between Manchester and Leeds. Known since the 1970s first as a haven for hippies, then subsequently New Agers, Eco-Warriors, drop-outs, spiritualists, mystics and latterly hipsters there isn’t a single national ‘brand’ of shop or cafe to be found there – only independents – and everyone looks out for everyone else. Oh, and it is also the UK’s lesbian capital; the greatest number per capita by a mile, for those interested in that sort of statistic. It was voted the fourth most quirky place on Earth recently.

Along the route is some of the most pleasant, relaxing scenery in the North of England.

So that’s my Sunday afternoon – relaxation and ‘nice’ quirkiness. And that, my friends, is what Le Lac Long 814 is all about and listening to this album along that journey (which it fits perfectly) is as appropriate as ‘here comes the bride’ is to a marriage ceremony.

‘Tessons Flottants’ will be released on 12th November on the Comedia label. A signed and numbered album will be available with a bilingual booklet. See their Facebook page for details.