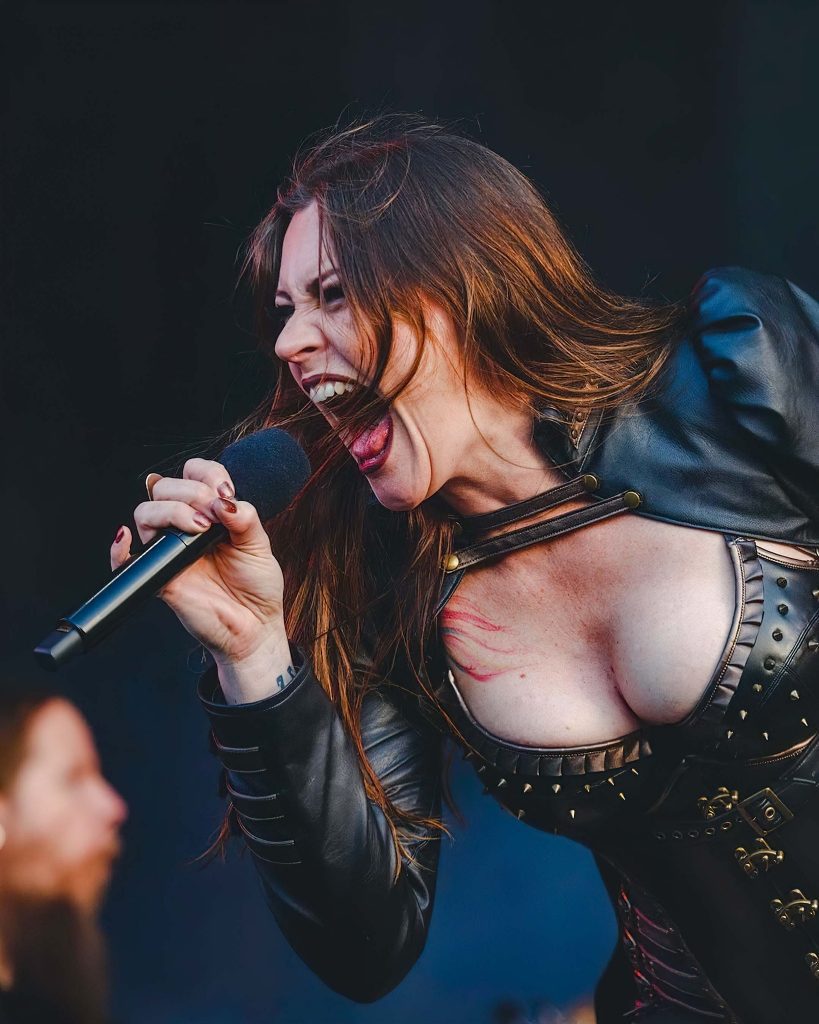 Nightwish (Finland) – is this the #1 female rock singer in the world?

Or perhaps I should just leave out the ‘female’?

Nightwish are one of my favourite bands and I’ve featured them several times in NMC. But not for a while, since they are engaged on a world tour which should (hopefully) bring them to the UK later in the year.

I’ve seen several videos of live performances of this song, ‘Shoemaker’, which is a paean to the astrophysicist and geologist Eugene Shoemaker (he of the Shoemaker-Levy comet which crashed spectacularly into Jupiter), who was killed in a car accident in Australia in 1997, his ashes subsequently transferred by NASA to the Moon. The only person from down here who’s up there in perpetuity if you get the drift.

The song is from Nightwish’s most recent album, ‘HVMAN. :||: NATVRE,’ released in April 2020, and it is no secret that it’s writer, Tuomas Holopainen, was highly dubious of the band’s ability to play a fast, complex song, most of which is in 14/8 time, convincingly on stage.

Of course they can do, and have been doing so throughout the tour, where ‘Shoemaker’ has typically been around song #14 of 18 on the setlist.

That might mean nothing much to you but bear in mind that the singer, Floor Jansen, has belted her way through 13 arduous symphonic metal songs, many of them quite exhausting to perform, and most of this one, before she reaches the tender operatic section at the end.  And then SHE JUST KILLS IT.

Incidentally, kudos here to the guy who filmed this, on a ‘phone, because it is far and away the best recording I have heard of any live performance of this song. Moreover, there have been complaints that Nightwish have been amplified too loudly on this tour, so that music and vocals have become almost inseparable, along with a vague bass hum. Somehow, that’s been largely erased from this recording.

Nightwish is renowned for the quality of its vocalists over its 25-year existence. There have been three. The second one, Anette Olzon, had more of a poppy style but the original, Tarja Turunen, was highly trained in classical singing and delivered most of her vocals in an operatic manner. She would have eaten ‘Shoemaker’ but would probably have sung all of it operatically so there would be no contrast between the different sections of the song.

Floor Jansen’s operatic training is less comprehensive than Tarja’s but she’s every bit as good at it. You might argue that any formal operatic singer would be able to perform this easily and undoubtedly they could but that’s what they do, every day. Floor Jansen is a rock singer. I can’t imagine Dame Kiri Te Kanawa or Sarah Brightman belting, can you?

And bear this in mind. The final part of this song, let’s call it “Laudato Si Ad Astra’ (‘All Praise be to the Stars’) which are the only lyrics, accounts stylistically for about 0.5% of what Jansen sings in the entire show and within seconds she has to adapt her persona from the arena she’s performing in to La Scala or the Vienna Operahouse.

I am in total awe of her ability to do it.

There’s a lot of talk amongst the many ‘reactors’ on You Tube to songs (usually musicians, composers or voice coaches/singers – and Nightwish attracts more of them than any other band from what I can see) to the use of ‘chest voice’ and ‘head voice’ and so on. (For those that have to know this section is apparently sung in the ‘passaggio’ voice, a transitionary one between head, middle and chest).

What I noticed far more here is that she seems to sing not only from her vocal chords but also her entire frame. The power generation is remarkable. She has just a few seconds to prepare herself while the spoken section (from Shakespeare’s ‘Romeo & Juliet’ and voiced by Holopainen’s wife, Johanna Kurkela) is played out and she sings without a trace of ego.

But you know, what is the most endearing thing to me is the way in which this strapping 6’ 1” 15-stone (I’m guessing, and none of it is fat) Amazon, an ‘impressive woman’ as Lemmy once famously described Stacia, shrieks with delight at the end, like a little girl who’s just been given a puppy or a new doll. You know that she knows she’s earned her crust for the night. We often forget how insecure and vulnerable musicians can be as Nightwish know to their cost having lost bassist and male vocalist Marko Hietala to recurring depression last year.

And note Holopainen as he turns to Troy Donockley and mouths the single word ‘Wow!’ And he hears it every night.

I think I answered my own question. This is the greatest (female) rock singer on the planet.

Enjoy. It simply doesn’t get any better than this.

1 thought on “Nightwish (Finland) – is this the #1 female rock singer in the world?”